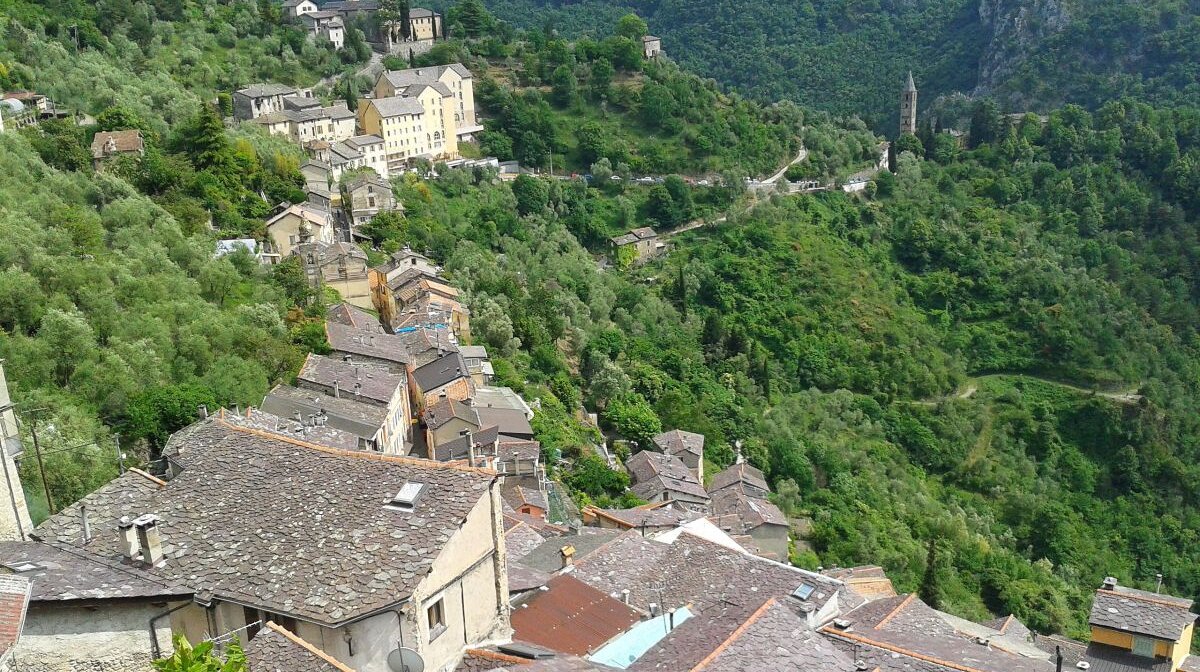 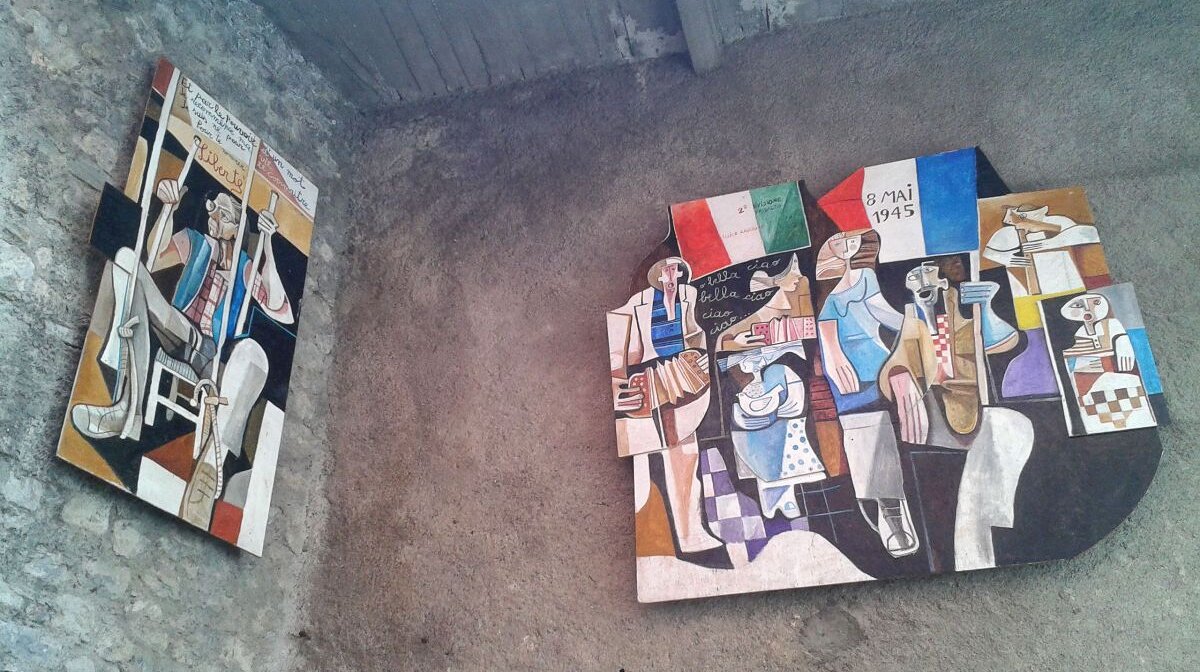 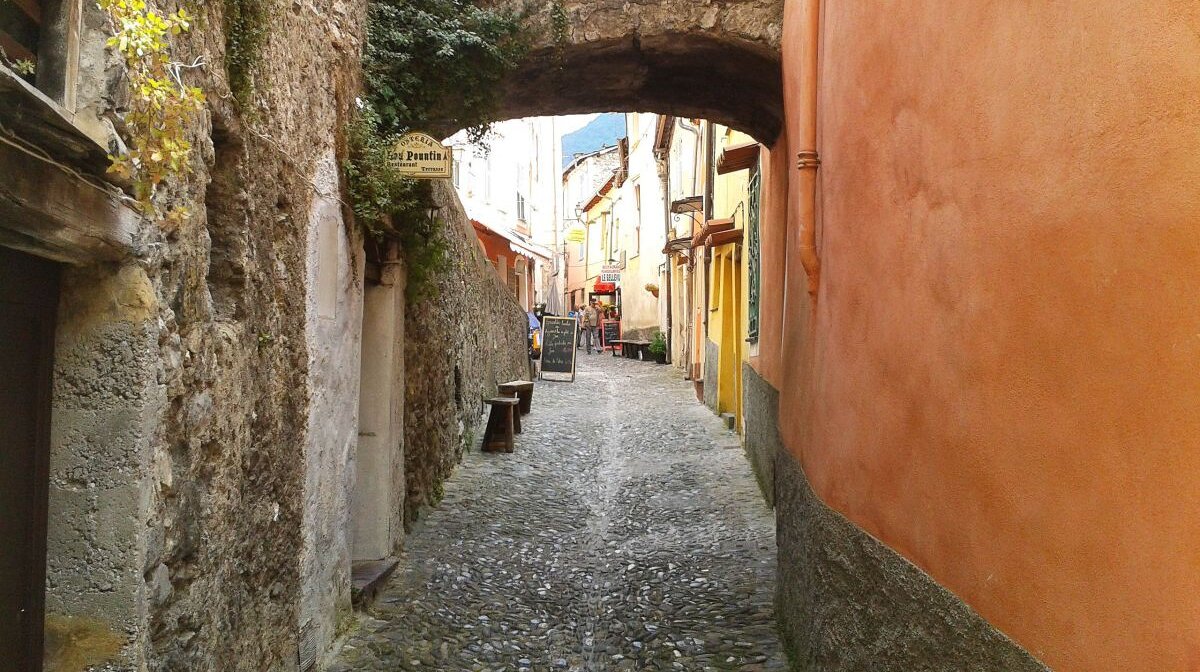 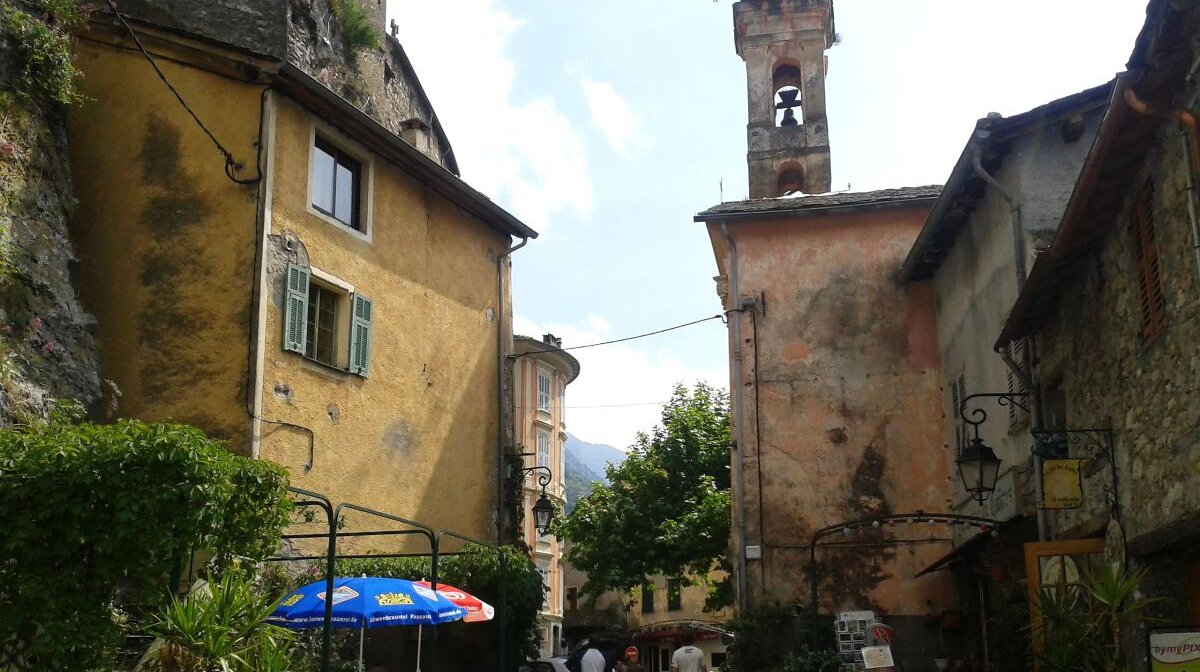 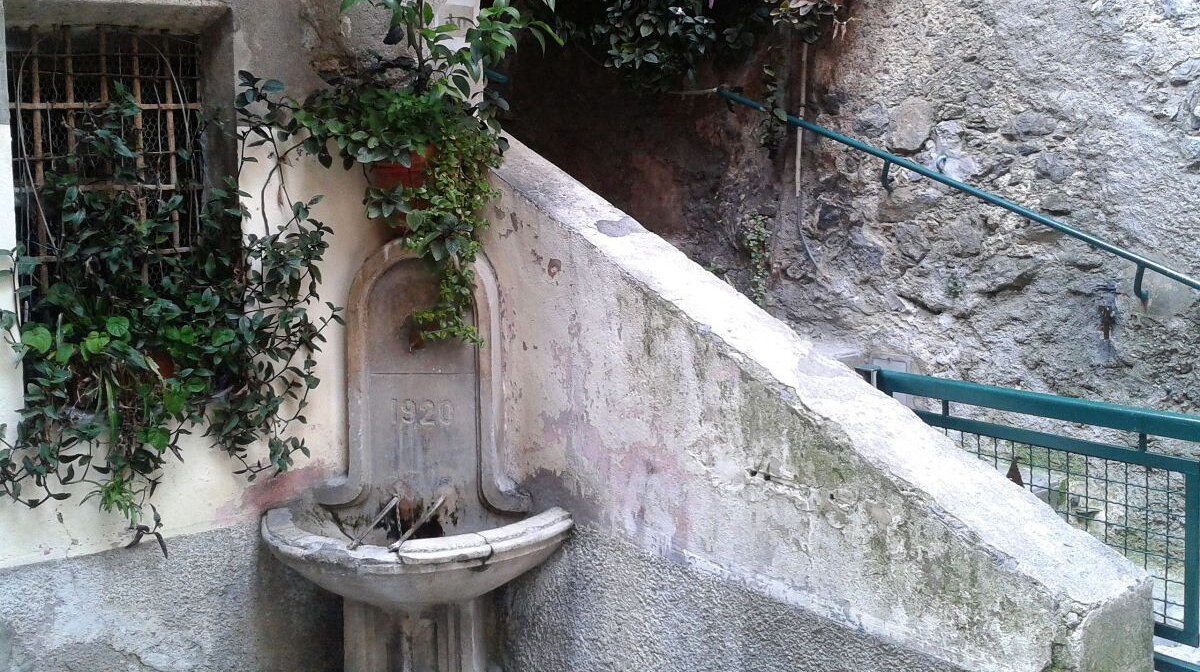 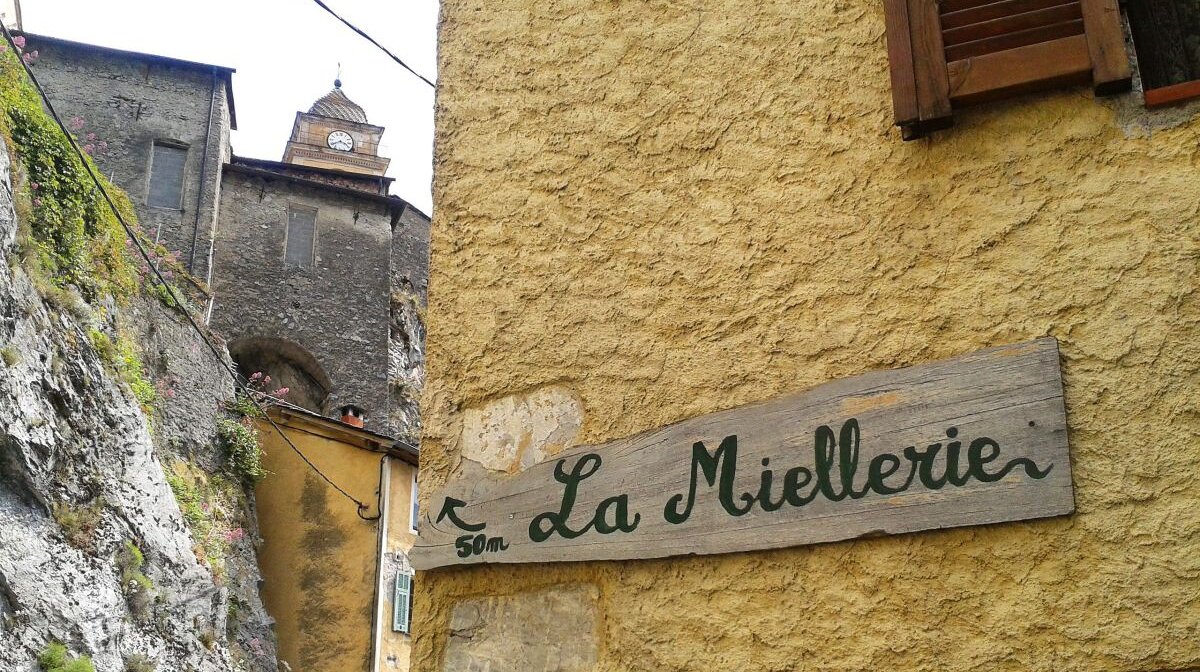 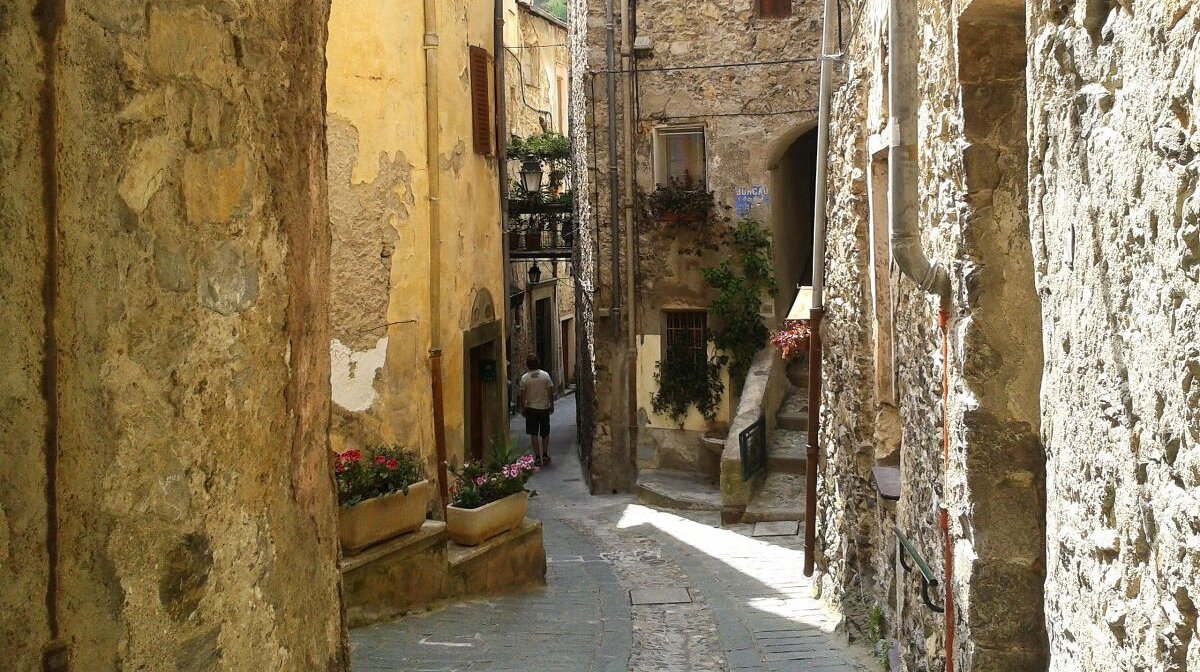 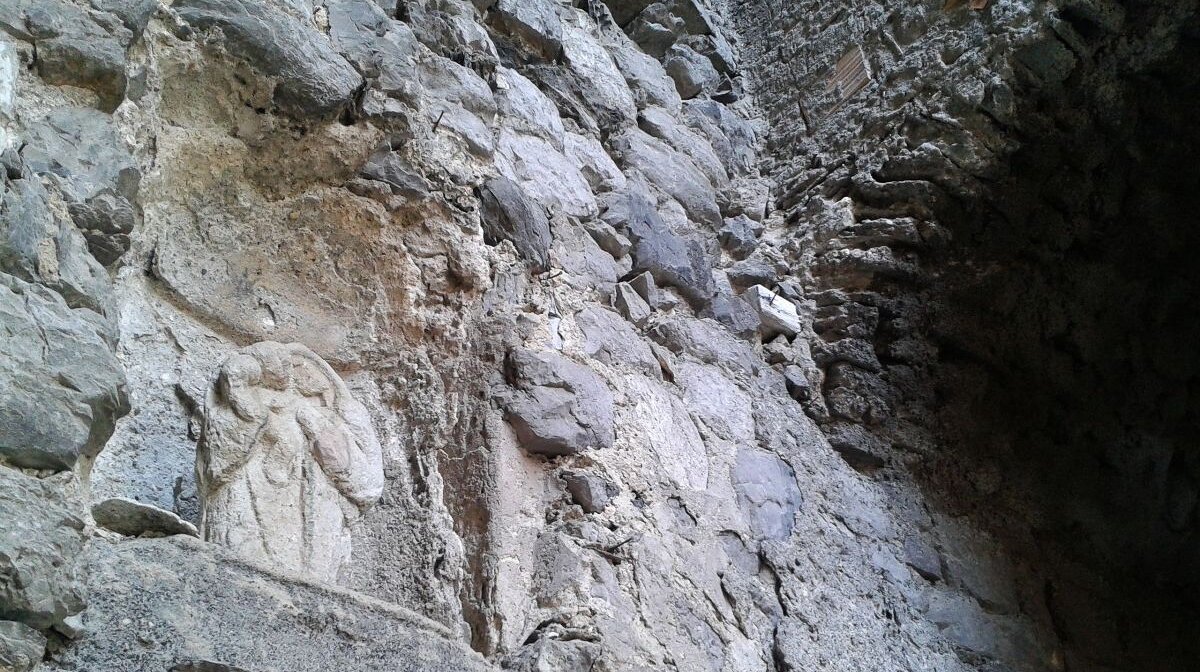 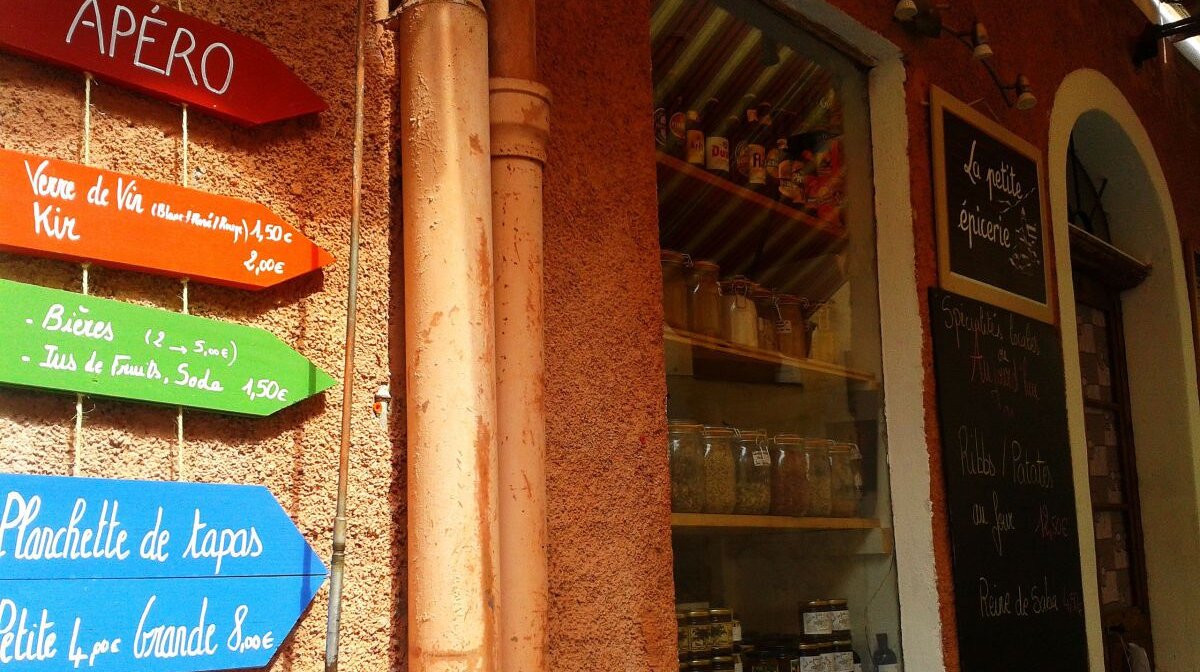 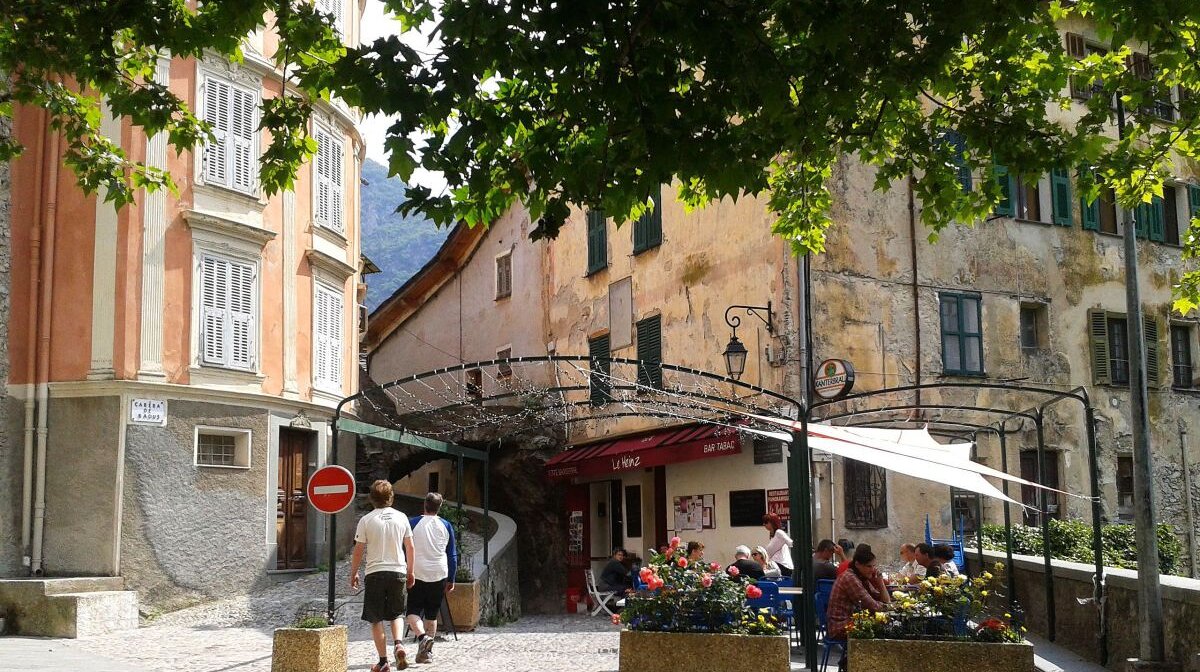 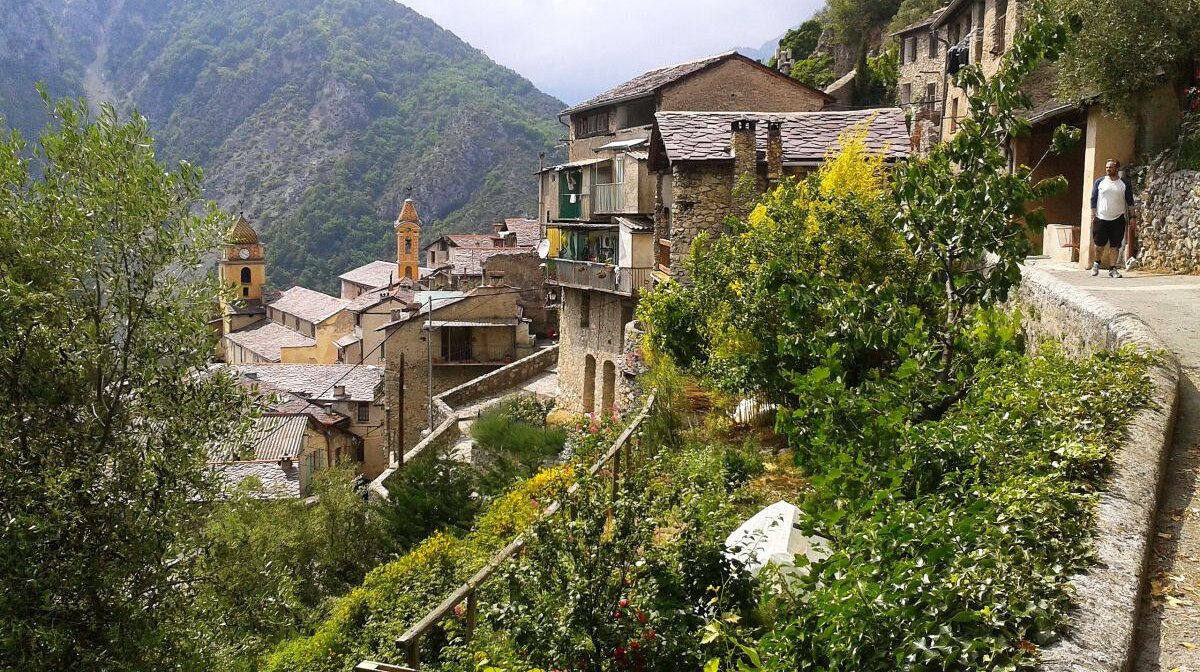 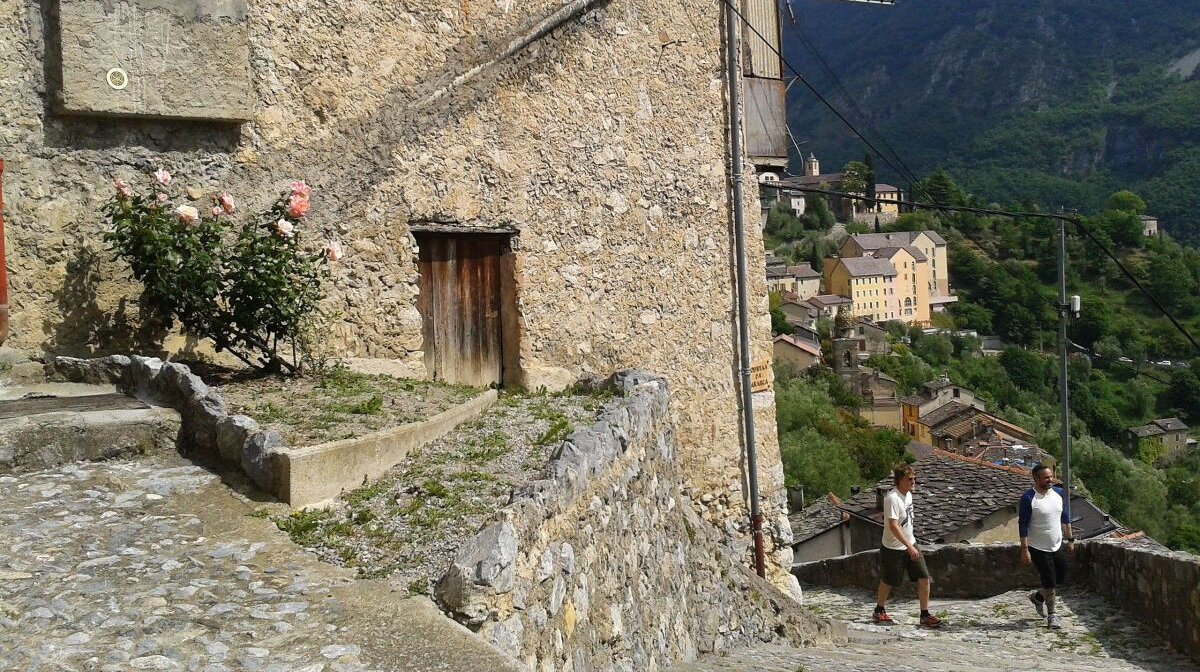 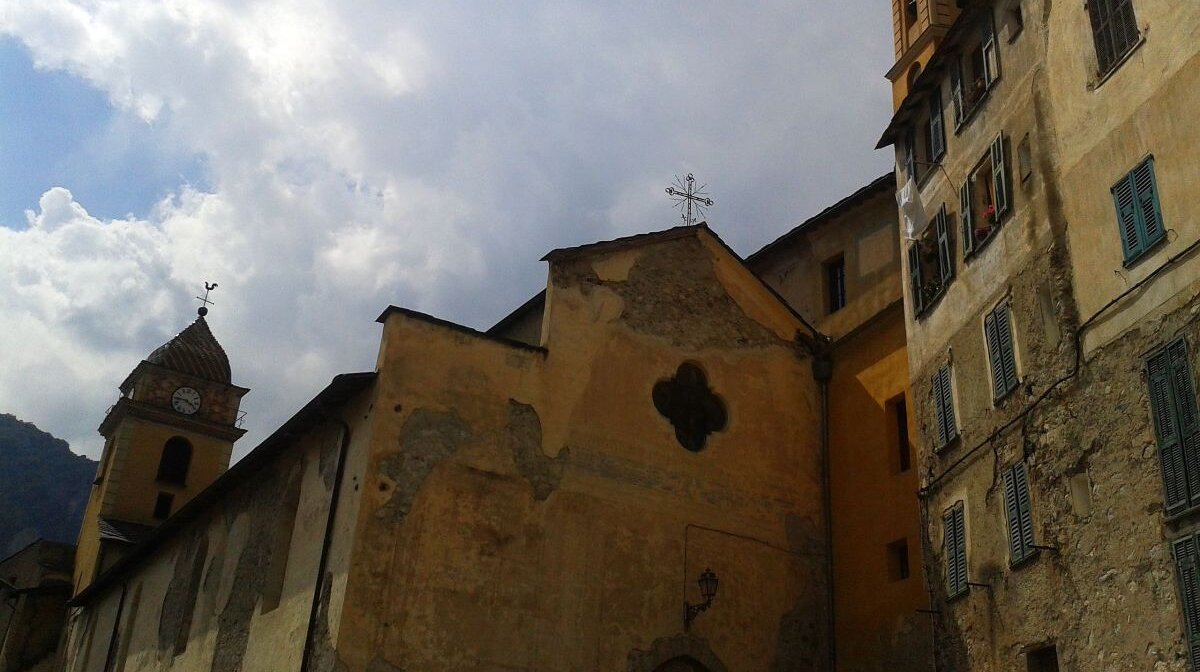 Saorge, perched on the mountainside of the Vallée de la Roya

Saorge, artwork depicting the town's part in the Resistance movement

The centre of Saorge village

Saorge, a fountain from last century

Saorge, the main square with cafés and shops

Saorge, houses and gardens clinging to the mountainside

Saorge is a wonderful medieval village perched high on a rock overlooking the magnificent Gorges de Saorge and the Vallée de la Roya; it is classed as one of the 40 most beautiful villages in France.

Saorge sits in the concave face of a steep mountainside, looking out as if from the seats of an amphitheatre. It was in a perfect defensive position during turbulent times and was considered to be an unassailable stronghold, guarded by no less than three castles.

Many of the houses are from the 15th to the 17th century and tower as many as 5 stories over the tiny courtyards. They are mostly ochre with some blue stone and red slate roofs; look out for the intricate details such as carved lintels, painted murals, sundials and engravings. A stroll round the streets will reveal some beautiful gardens and vegetable patches on impressively steep ground, mostly tended by elderly people with a remarkable resistance to gravity.

Saorge was first recorded in the 10th century as Saurgio and you can find Roman inscriptions on many of the buildings.

The narrow cobbled streets twist their way up to the top of the village, passing through tunnels and old vaulted passages to get to the ancient Franciscan Monastery. The trompe-l'oeil facade and frescoed cloisters are worth the walk, as is the fantastic view down over the village with its slate roofs and tiled bell towers. Look down below the village and you’ll see the Romanesque bell tower of Madona del Poggio, an 11th century church that was built by Cistercian monks from the Iles de Lérins just off the coast of Cannes.

Saturday is market day in Saorge and is a great opportunity to try some local produce such as cheese, honey, olives and wine as well as various crafts that make lovely souvenirs.

Things to Do in Saorge

The GR52 “Grande Randonée” hiking trail passes right through Saorge and climbs up to the monastery and into the mountains on the way to La Brigue. There are various other routes offering endless possibilities and adventures in the Roya valley; routes are marked on the map IGN (1/25,000) #3841 OT "Vallée de la Roya", or look out for the many signposts around the village.

Saorge is home to Bendola, the biggest canyon in the Alpes Maritimes, where you can go abseiling down waterfalls and plunging into swirling torrents. Other local activities include mountain biking, rock climbing and trout fishing.

Tucked away amongst the maze of streets and alleyways are a few little shops and cafés; the square at the entrance to the village is the hub with a couple of little shops and bars where the locals like to gather for a pastis or two.

The most enjoyable way to get to Saorge is on the Train des Merveilles that runs daily from Nice to Cuneo, stopping at many villages along the way. The train stops at Fontan-Saorge, approximately 1km (downhill) from the village.

If you want to come by car you can follow the D2204 from Nice or the D2566 from Menton, both of which pass by Sospel.