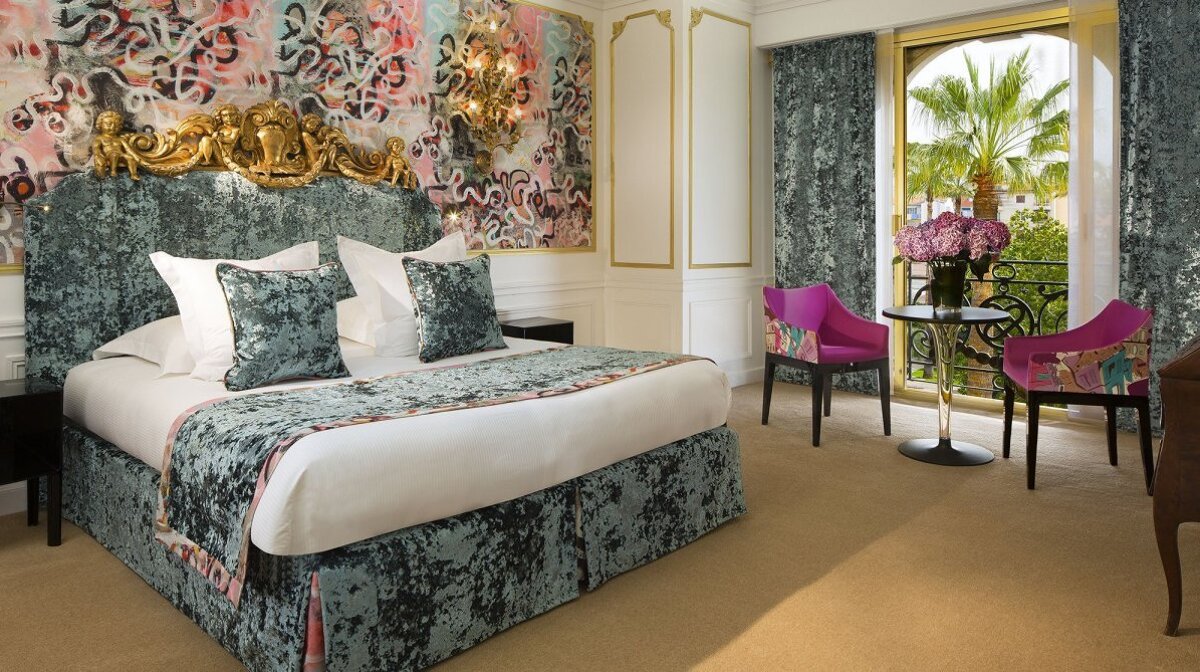 The Mediterranean city of Nice with her 'grand dame' hotels on the famous Promenade des Anglais has always attracted the rich, the famous, the bourgeoisie and the aristocracy. If one thing is for certain, it's that Nice is open for business when it comes to luxury accommodation.

Nice hotels ooze a sense of Belle Epoque glamour and chic style, as each venue seeks to stand out and impress in a town that built its tourism around a mild Mediterranean climate and the natural beauty of the area. Here are some of our top picks for 2019.

Between sea and sky, the Suisse Hotel and her guests enjoy a privileged location overlooking the Baie des Anges and the length of the iconic Promenade des Anglais. The Italian-style façade of this waterfront hotel is nestled beside the Montée Lesage which leads you on a winding path all the way to the Parc de la Colline du Chateau. Each room offers a magnificent panorama, many with balconies so that you can enjoy this breathtaking view to the full. Sleek lines combined with modern white furniture give the rooms plenty of light whilst the warm tones of the décor create a cheerful and cosy atmosphere where you'll be glad to rest after a walk along the Promenade des Anglais. For four-star service with a five-star view, look no further than the Suisse Hotel. 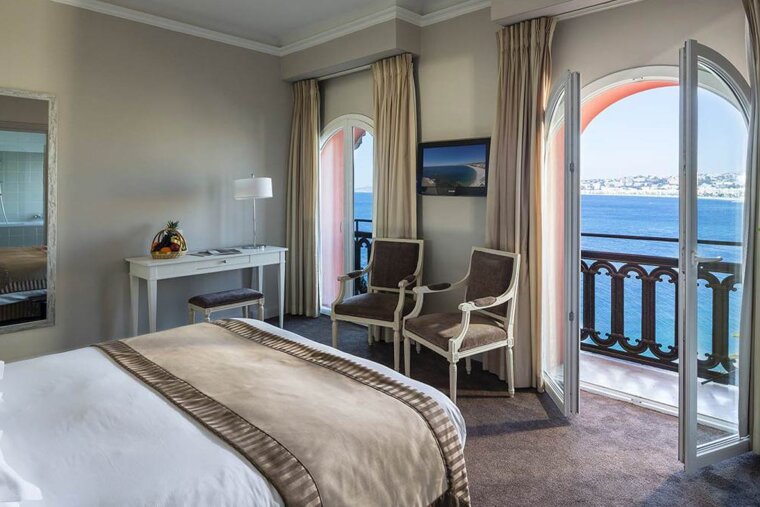 If the walls could only talk! The ornate façade of this vast Belle Epoque beauty rises over the Promenade des Anglais like a grand old dame – one who still remembers the swinging jazz parties of the 1920s, the dark wartime days and the steady stream of movie stars, royalty and world-shakers who have walked through its doors into the opulent lobby. Le Negresco Hotel is one of the most luxurious hotels in Nice and is home to one of the most highly regarded restaurants, the two-Michelin-starred Le Chantecler restaurant. Since its inception in 1913, many personalities from around the world have scrambled to stay at this majestic property, amongst them the artist Salvador Dalí, Princess Grace of Monaco, The Beatles, Louis Armstrong, Elton John, the Vanderbilts, Portugal’s Queen Amélie and the Grand Dukes Vladimir and Dimitri. Now it's your turn. 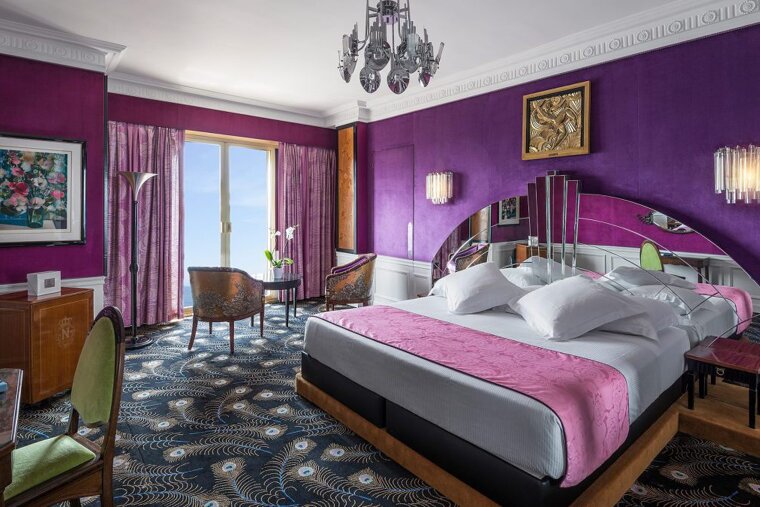 The classic chic style of the Palais de la Mediterranée Hotel offers you a luxury hotel experience in unrivalled refinement whilst enjoying the views and the luxury shopping on the famous Promenade des Anglais. Overlooking the Mediterranean, it has a half-moon outdoor swimming pool set just behind its impressive columns and a much-talked-about casino. Inaugurated in 1929, the hotel features luxurious and spacious guest rooms. You can't fail to be impressed with art deco façade, that is lit up in the evening, setting it aside from many of the other hotels along the Promenade. If you want to enjoy a luxury break in the heart of this cosmopolitan city then, why settle for less than a palace by the sea? 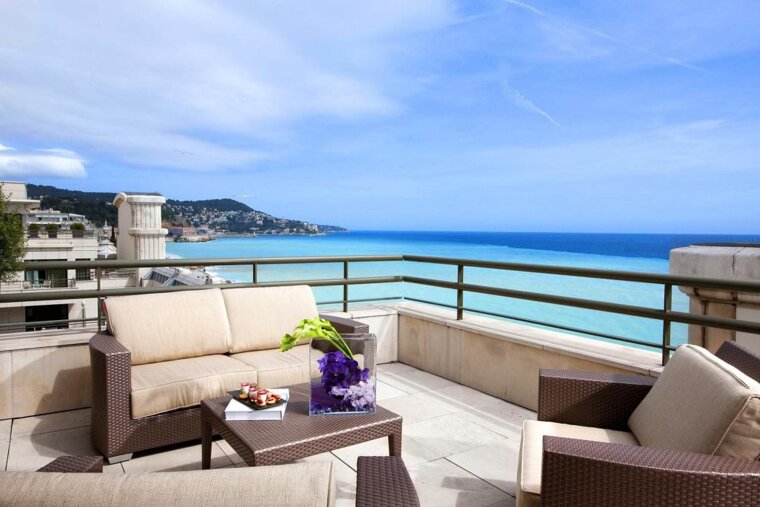 You can't mention luxury hotels in Nice without talking about the exquisite Grand Hotel du Cap-Ferrat. A firm favourite with the Cannes Film Festival goers and the jet set who come to Monaco to enjoy the annual F1 Grand Prix, this hotel is set within 17 acres of secluded grounds, boasts exquisite gardens and has a private coastline overlooking the Mediterranean. Romantic and glamorous, its illustrious history as the Cote d'Azur's most legendary palace hotel is a reminder of the aristocratic and celebrity clientèle who frequent it. As if this luxury location wasn't enough you can also enjoy a world-class spa and Michelin-starred restaurant. The menu varies by the season, reflecting the finest ingredients from local markets with a selection of the freshest fish, seafood and meats. Enhance your dinner with a grand cru from the Grand-Hotel’s list of 600 wines, representing the top vineyards of France and beyond. Artist Michèle Letang’s mural inside the restaurant is a tribute to the artistic style of Jean Cocteau, once a regular guest at the Grand-Hotel.

The 'pink palace', as it's affectionately known, offers classic French lavishness with Mediterranean charm nestled between the mountains and the azure waters of the Riviera. La Reserve de Beaulieu Hotel’s celebrity guest list is a compendium of illustrious guests from the 1950s and the age of glamour such as Rita Hayworth, Clark Gable, Paul Newman, Charlie Chaplin, Edith Piaf and Frank Sinatra. With 39 guest rooms, suites and villas, all filled with period furniture and pieces made to order by fine cabinet makers, this hotel lives and breathes opulence. La Reserve was founded in 1880 by Pierre Lottier, a restaurant owner from Nice. It began as a luxury seafood restaurant, and “La Reserve” was the nickname given to the live fish tank which Pierre Lottier had dug out in order to stock the local fishermen’s catch. By 1905, La Reserve de Beaulieu had added some 10 prestigious rooms reinforcing its status as the preferred destination of the world’s aristocracy who were flocking to the Cote d’Azur. 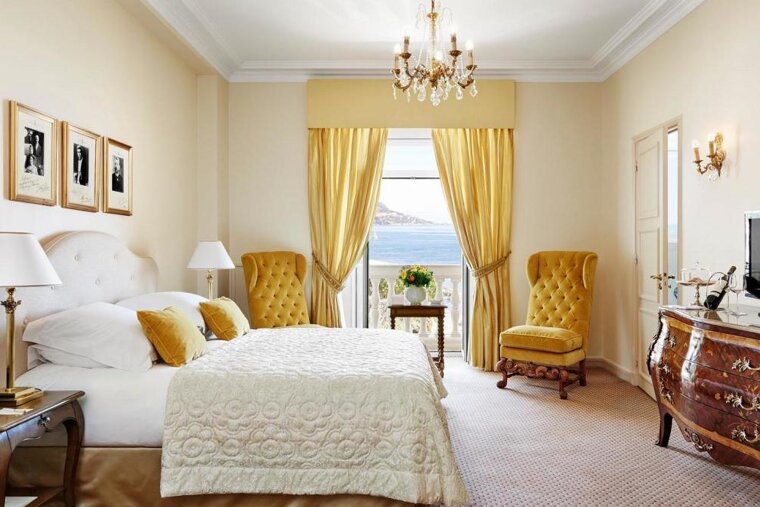 For where to stay this summer in Nice, check out our other favourite Luxury and Boutique Hotels.